Over the weekend I traveled to Isla Holbox, Mexico for my best friend’s wedding.  (Congratulations Anne and Juan!)  I had never been to this part of Mexico, and I don’t think I have ever received more messages to do a round-up than while I was here.  I wanted to make this one a bit different, because I feel like I didn’t pack well, and I didn’t know much about the location before we went.  I’ve included where I stayed along with what I packed, what I actually ended up wearing, and what I thought I was missing.
So here we go – Isla Holbox!

First, a lesson on how to pronounce the name of the island.  For a while, I wanted to say Horcrux until I remembered that is from Harry Potter.  Then I was saying haul-box and again, wrong.  The island is pronounced hole-bosh.  Would have never known.  Thank you to the locals for correcting me – many times. 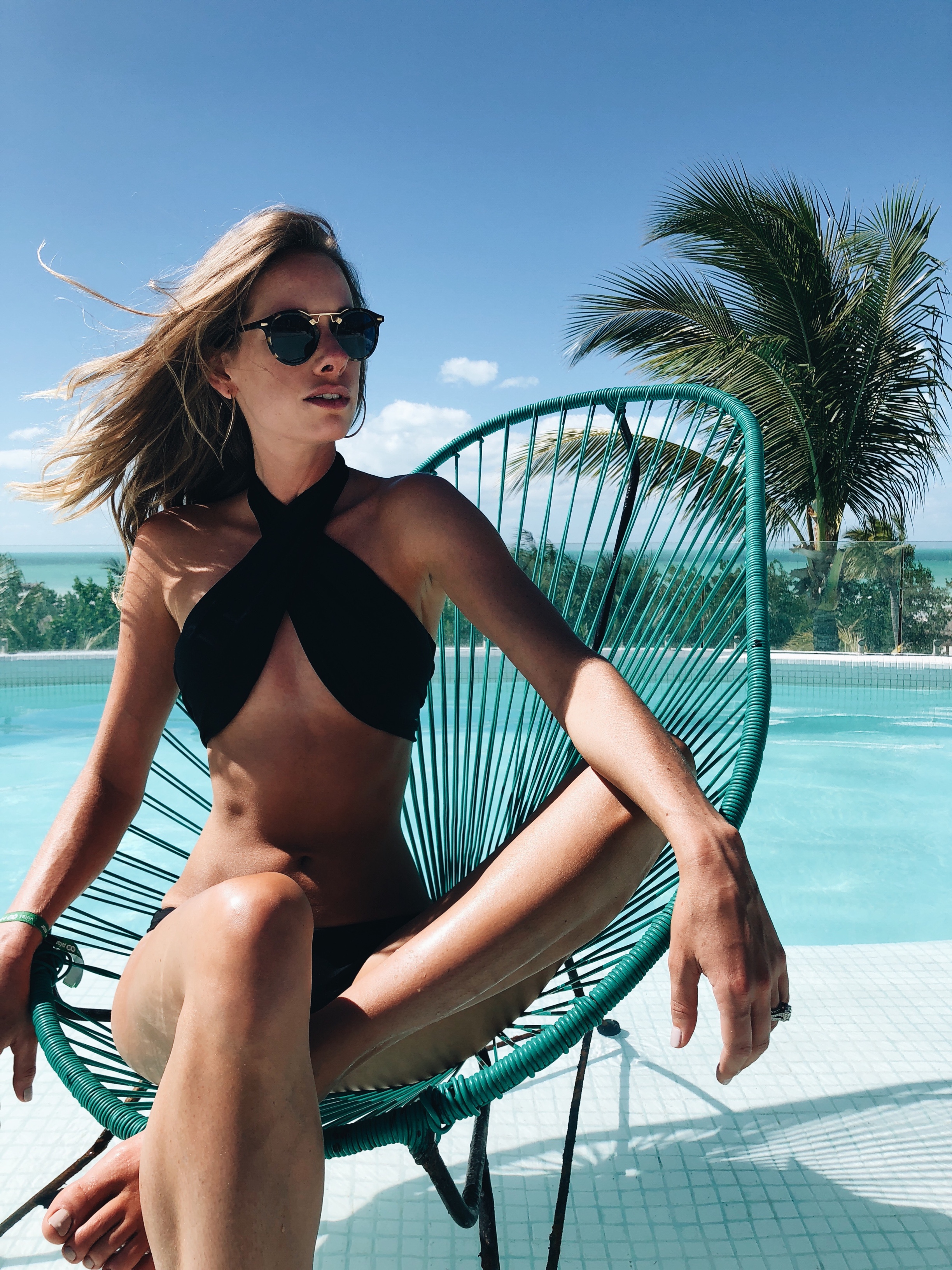 To get to Holbox on a commercial flight, fly into Cancun and then rent a car service (mine was $100 per person round-trip) to drive you to the Chiquilá port (two hours from the Cancun airport) for the ferry (thirty minutes to the island, $140 pesos or $8 US dollars.)  There you will purchase a ferry ticket, and they only accept pesos.  Another option is to take an air taxi to the island – either a Cessna or a helicopter.  Flying private, there is a small airport on the island with a dirt runway.

If traveling by ferry, you’ll arrive to the island and see a line of golf cart taxis.  There are only golf carts on the island, and you can rent one while you’re there.  Most hotels also have bike rentals.  Don’t attempt to roll your luggage down the streets – you will fail.  There are no paved roads, and you won’t look that cool unless you’re only rocking a backpack. 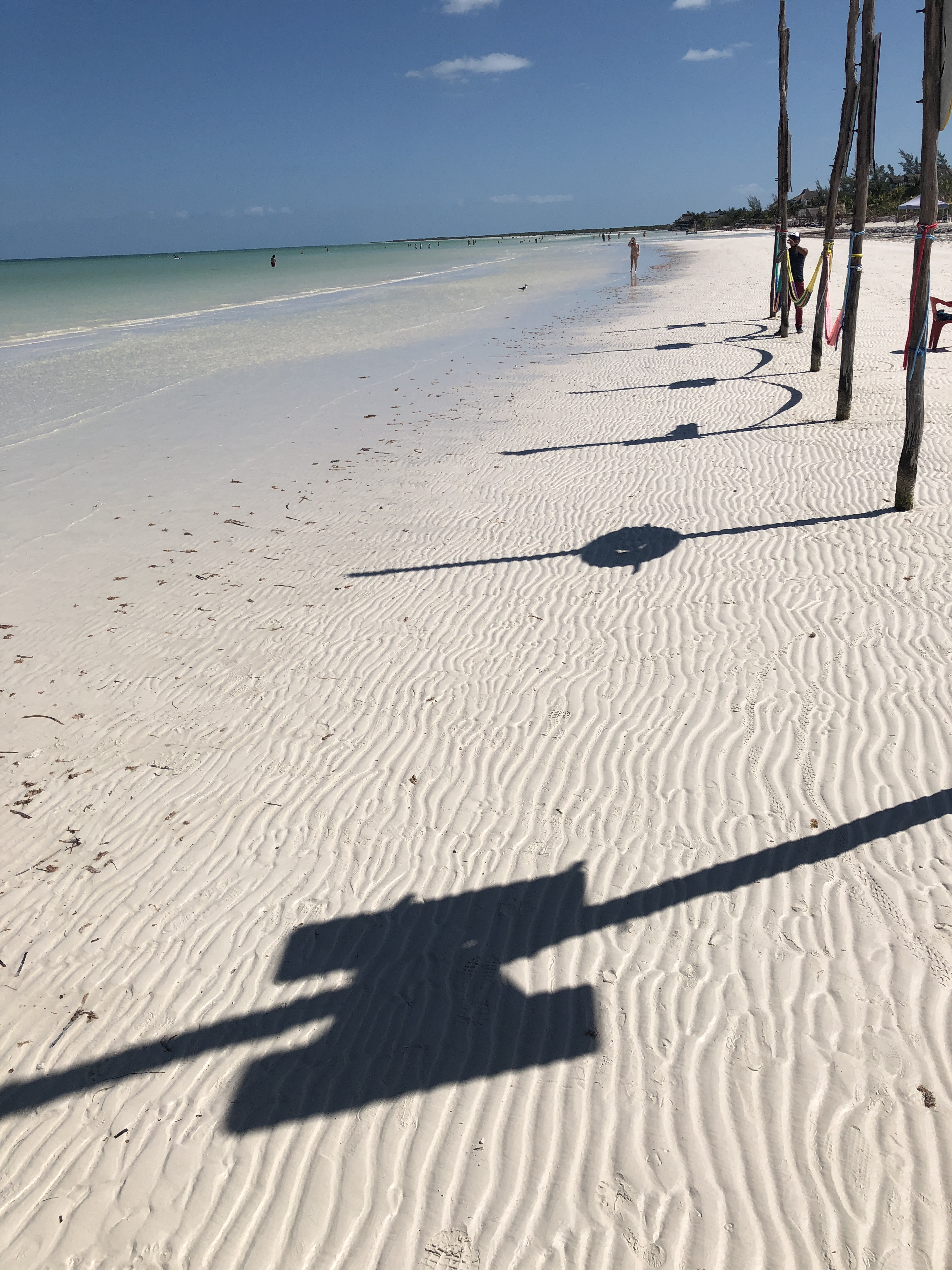 My room was beachfront with a pool.  I had never seen two king beds in one room until now, which was shocking that it was that large.  The hammock on the front porch was well used, but the pool I only got in twice.  In the middle of the summer, it would be amazing but the weather was still cool at night so the pool was chilly and didn’t have a heater.  Hindsight, I rather would have had a second story room to better see the sunsets. 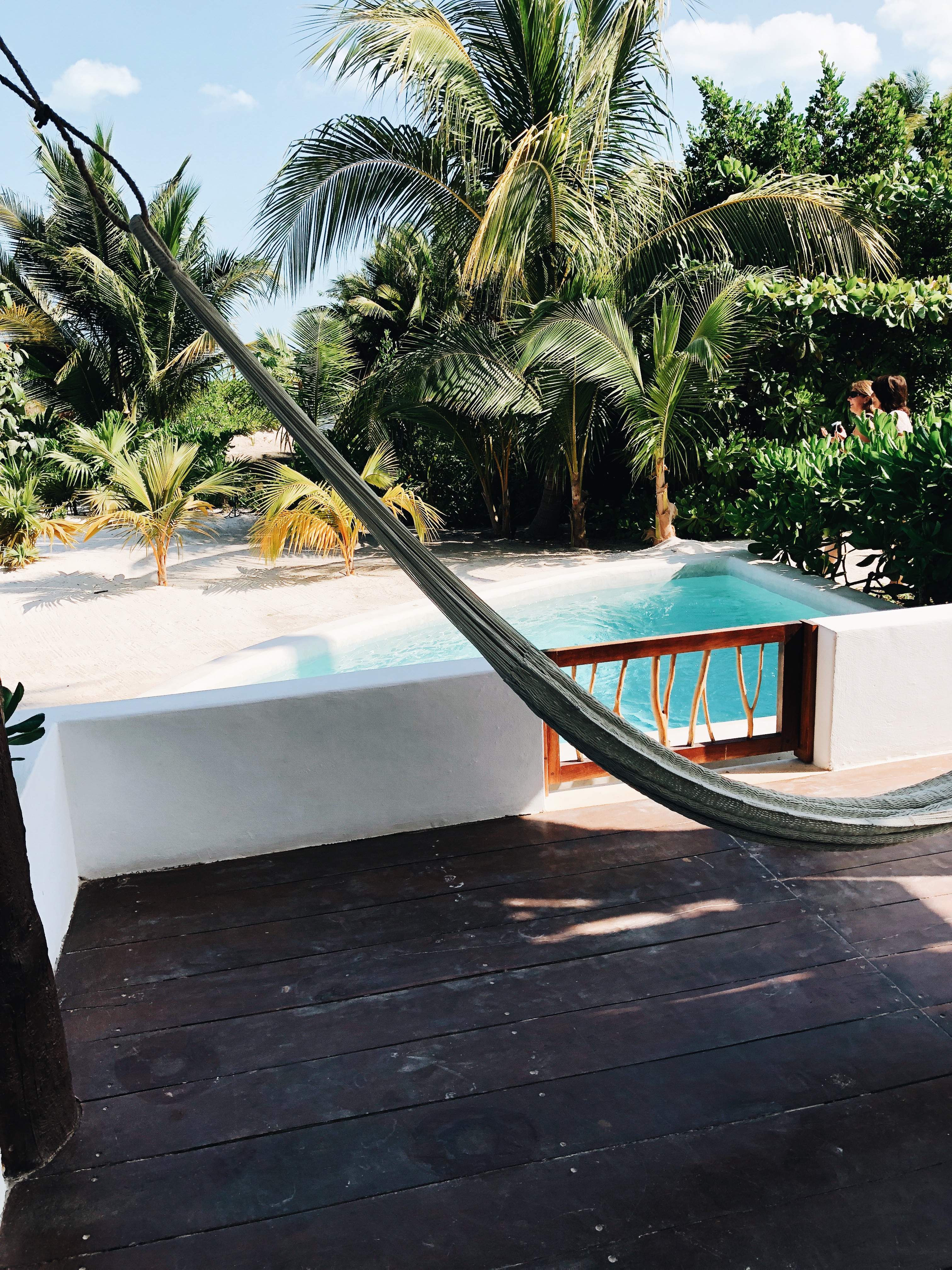 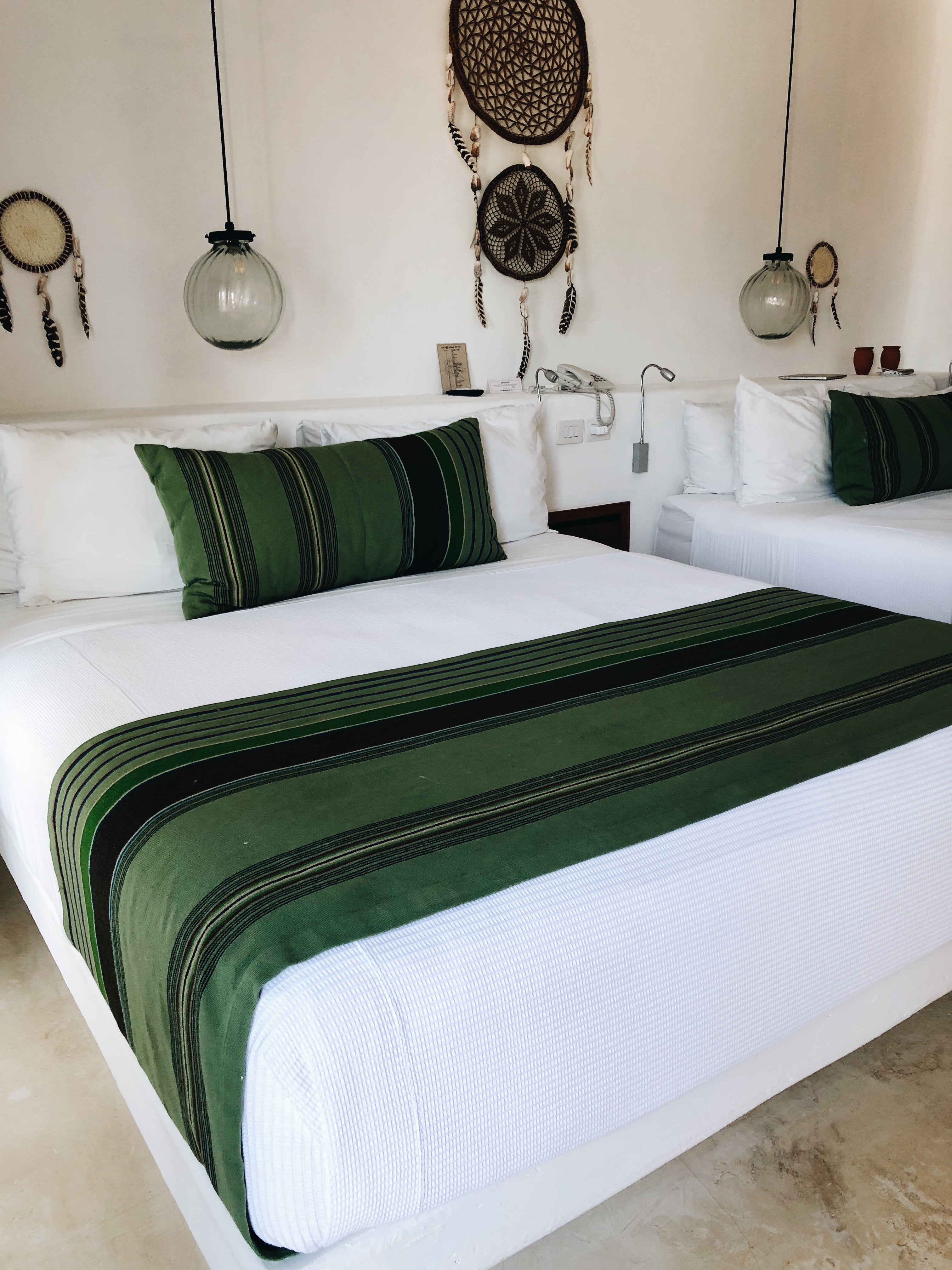 The hotel has a second story pool deck with swings that I didn’t discover until day two, unfortunately.  I hung out there most often.  There are chairs you can put into the pool and the beach view is amazing.  The sushi bar is right next to the pool, and opens at 7pm. 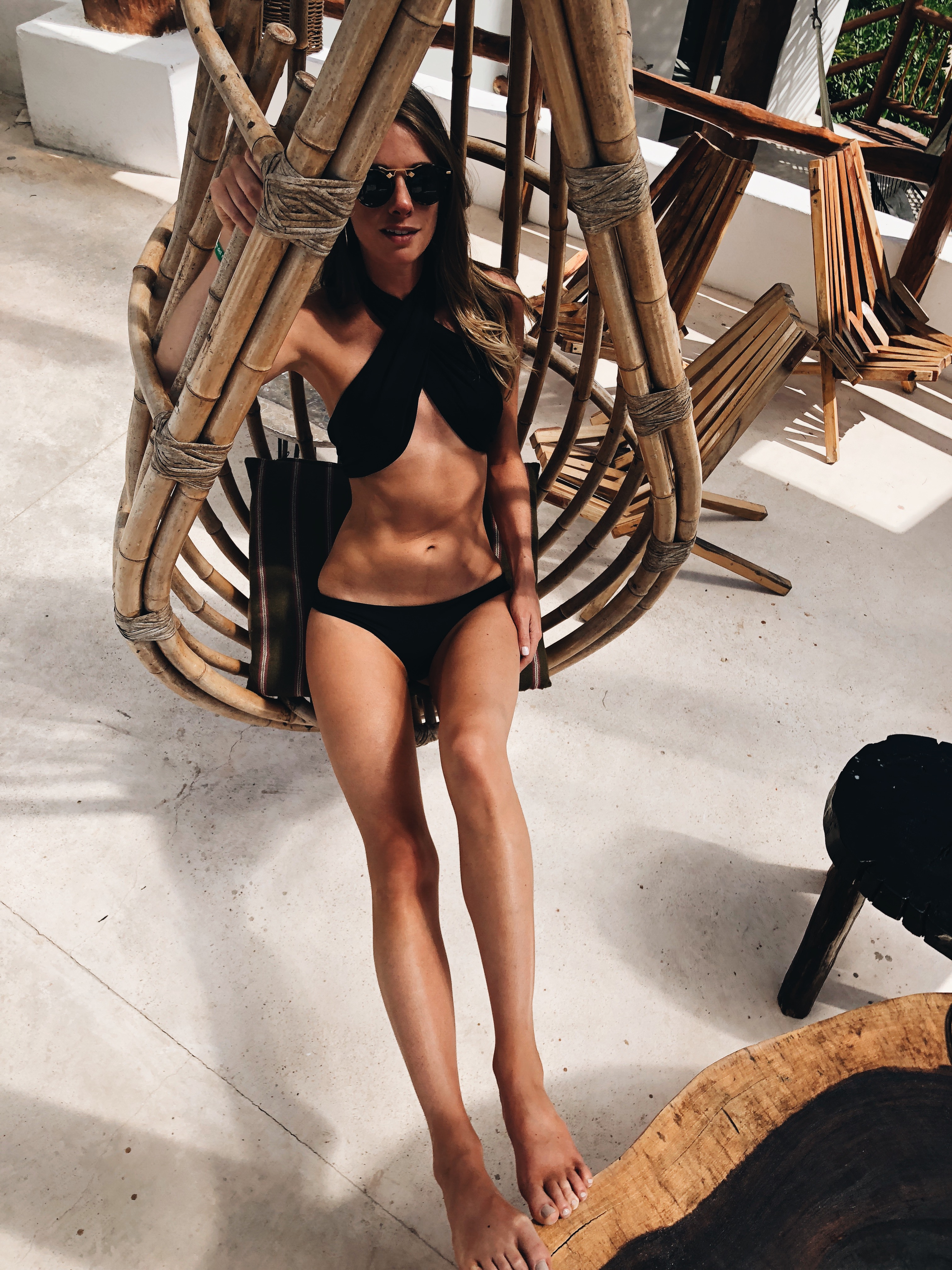 Breakfast is included at the hotel, and for a complimentary breakfast there were plenty of options.  I found out that you can really order anything from the buffet chef once I saw breakfast burritos and quesadillas being created.   Again, discovered a few days too late.

Other hotels that I visited:

Las Nubes – this is were the reception for the wedding was held.  The upstairs bar is INCREDIBLE, with 180 degrees of water views.  The restaurant is very quaint and cute, and the hotel overall is smaller.  The water gets more shallow as the island comes to a point, and the hotel was on said point. That’s where you can spot the kite surfers on windy days.  You can also walk out into the water quite a ways (similar to Turks and Caicos) and only go waist deep – perfect for paddle boarding for those of us that don’t want to brave kite surfing. The sunset the night of the wedding was the best I had seen. 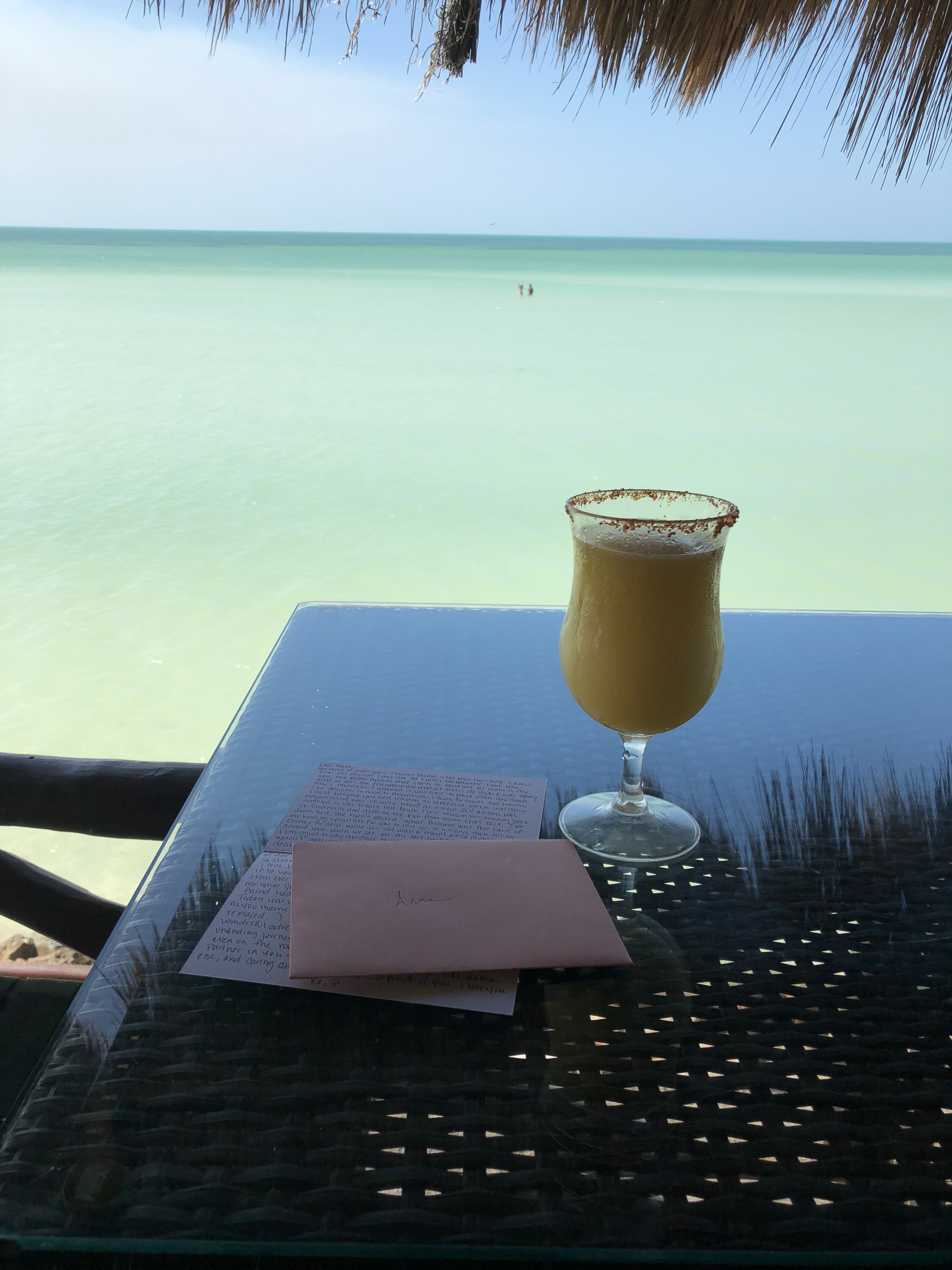 (This is the view from the bar where I wrote a note to my best friend and full on cried into my mango margarita.  Outside of the tears, the mango margaritas are delicious.)

The wedding food – holy moly.  Bacon wrapped shrimp, steak, lobster, ceviche – bravo Vickie Owens.  It was by far the best wedding food I have ever had.  If the restaurant food at Las Nubes is as good as the wedding, prepare for a full stomach.

Annie won’t let me post her GORGEOUS wedding dress until after her second reception in Charleston this summer.  Her reception dress was also freaking adorable, but my friend was the most stunning bride I have ever seen.  But you must wait.

Isla Holbox was in the Nordstrom catalog this month.  The editors suggested staying at Casa Las Tortugas, and while it was beautiful, it wouldn’t be my first choice.  Their restaurant Mandarina was amazing  – Italian based and beachfront.  Their wine selection was the best I had experienced on the island.  The hotel itself is right next to the town and the bars, and I rather be further away where it’s quieter.  LUUMA, the bar next door, is also part of Casa Las Tortugas.  The food was great and the welcome drinks we had there were wonderful.  They also had a really cute boutique with some pieces I wanted to bring home.  Nordstrom also suggested a block heel on their packing list.  NO.  Don’t do it.

Anne told me before we arrived that there were no paved roads.  I heard her say that, but I still didn’t pack accordingly.  Bring your espadrilles and your sandals, but I wish I would have left my designer shoes at home.  Everything gets dusty and you will be much more relaxed if you don’t have to worry about wiping down your Hermés when you get back to the hotel.

So here is what I actually packed, minus my airport outfit that’s in the washer. 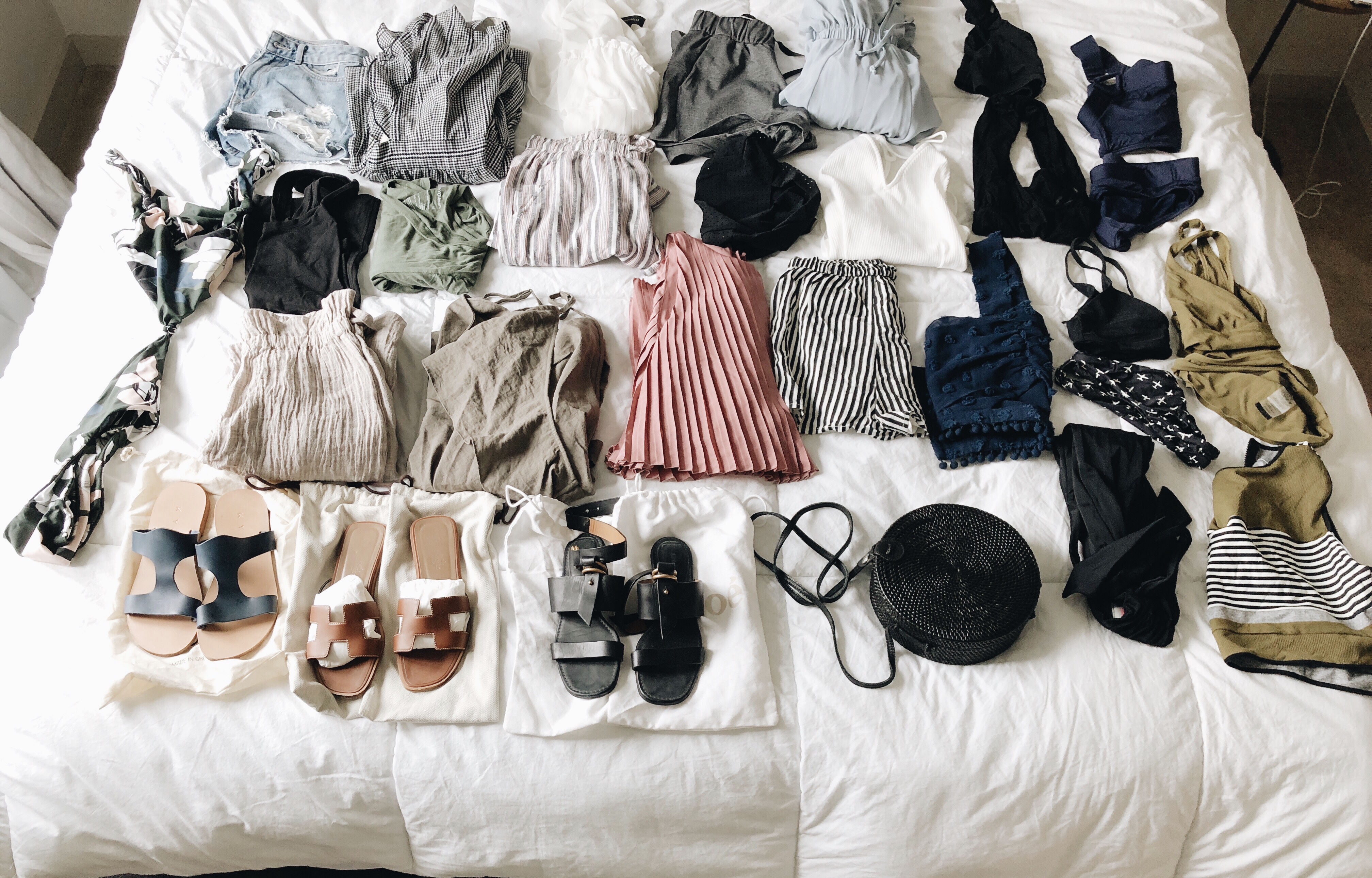 What I actually wore: 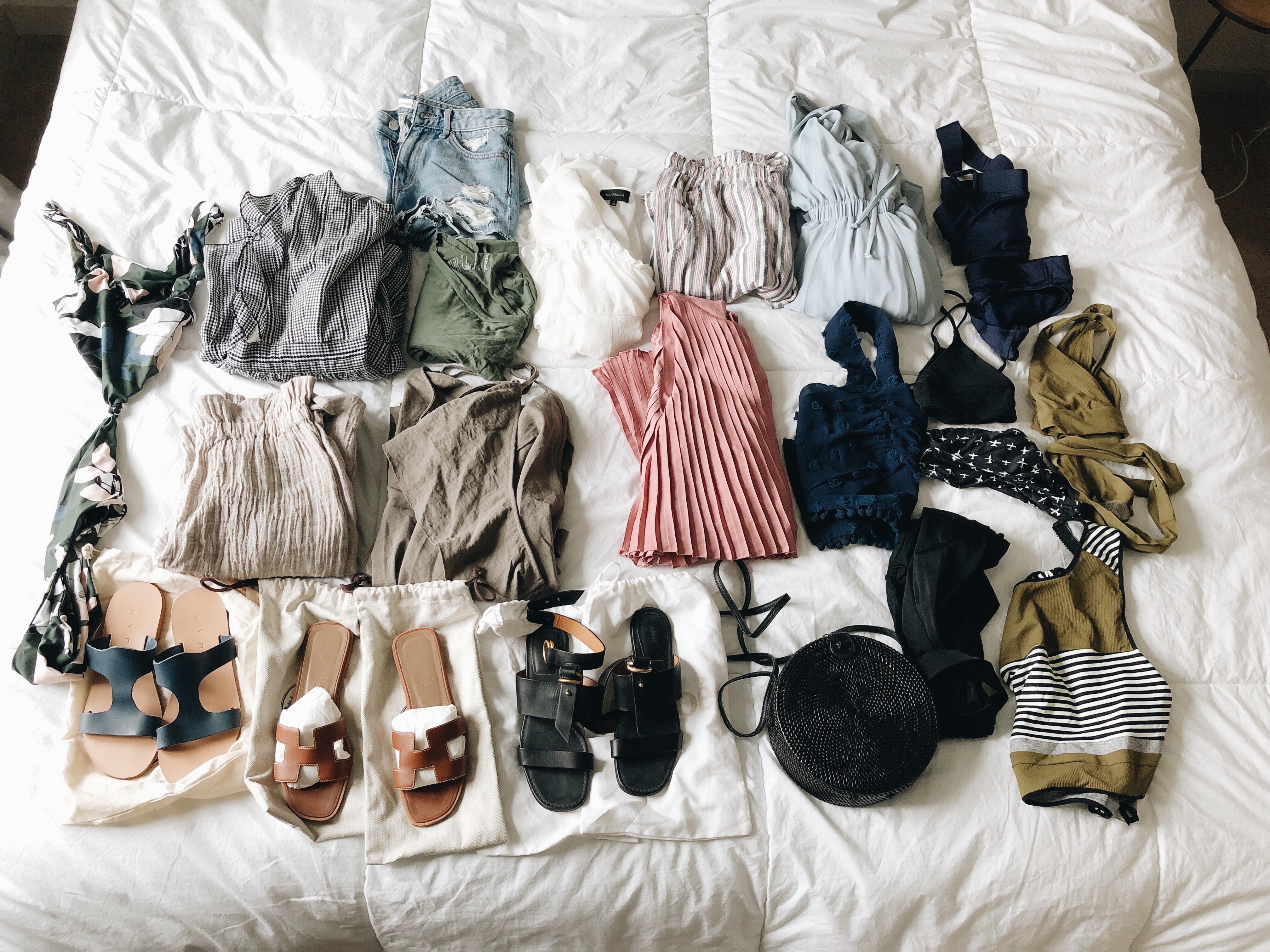 Exploration Day:
These swings are at the opposite end of the island (to the left of town).  There were tons of hammocks in the water around our hotel, but the only swings I could find were at the other end of the island.  If you want the shot that looks like you’re in the middle of the water, check for high tide before making the walk.  These swings are about a ten minute taxi or a 1.5 mile walk.
Rehearsal Dinner:
Apparently I didn’t take any photos, but it was so fun!  This was definitely a cooler night, and I wish I would have had a wrap or a jean jacket.  We also sat on the floor so this wrap dress wasn’t the best choice, but it’s still perfect for Mexico.
Wedding day!
I LOVED that Anne chose these dresses.  They were comfortable and we were all able to be barefoot as soon as we got to the beach.  Light weight, an elastic waistband, and the perfect color blue.
Hang Out Day:
These hammocks were at our hotel, and there was always a few open. 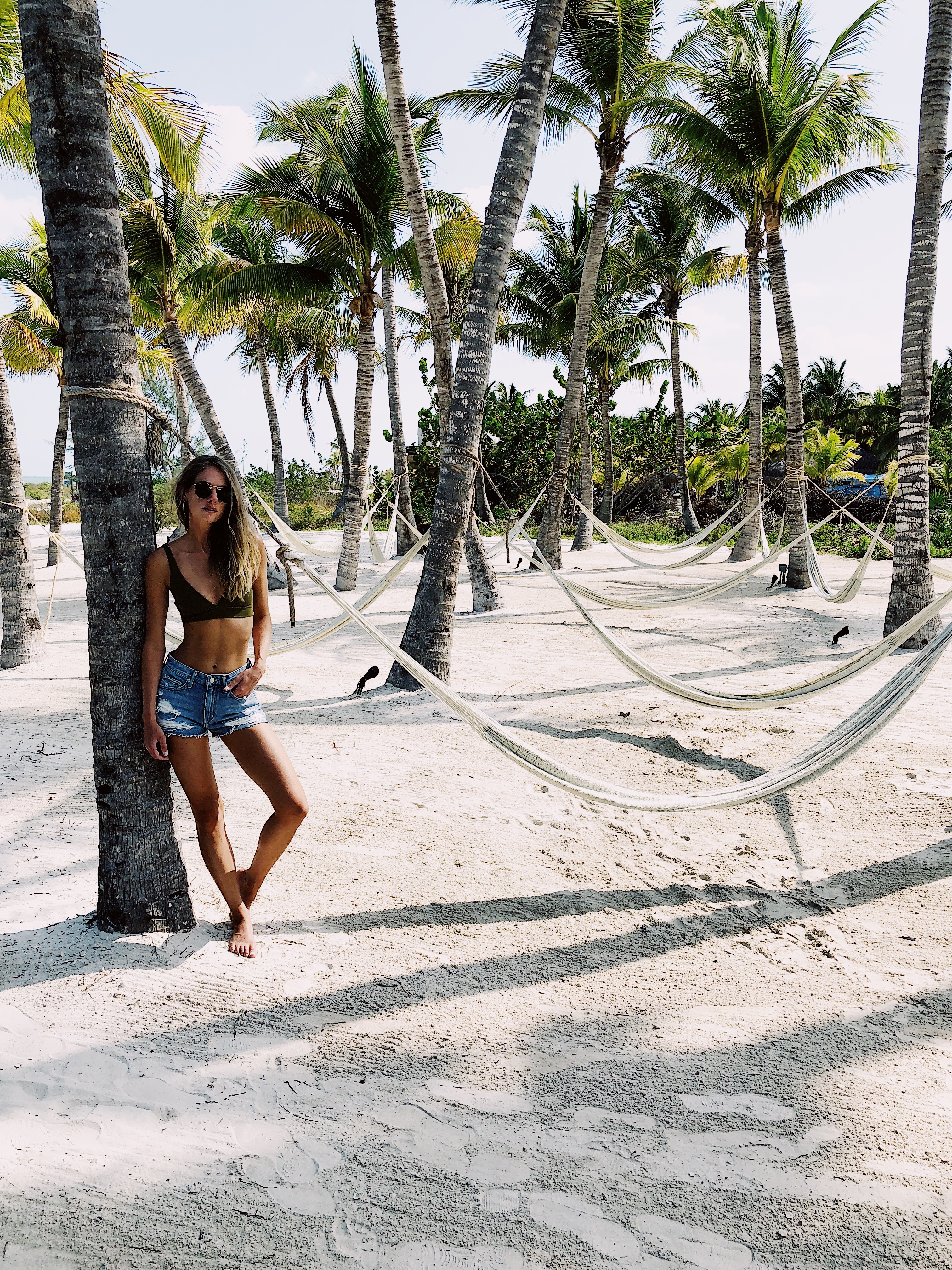 All day every day: Bathing suits
I’ve tagged what I could find, but most of my bathing suits are Boys and Arrows from this trip.  Locals in Greenville, they are from Splash on Main!
The asymmetrical navy suit is my Mei L’ange. 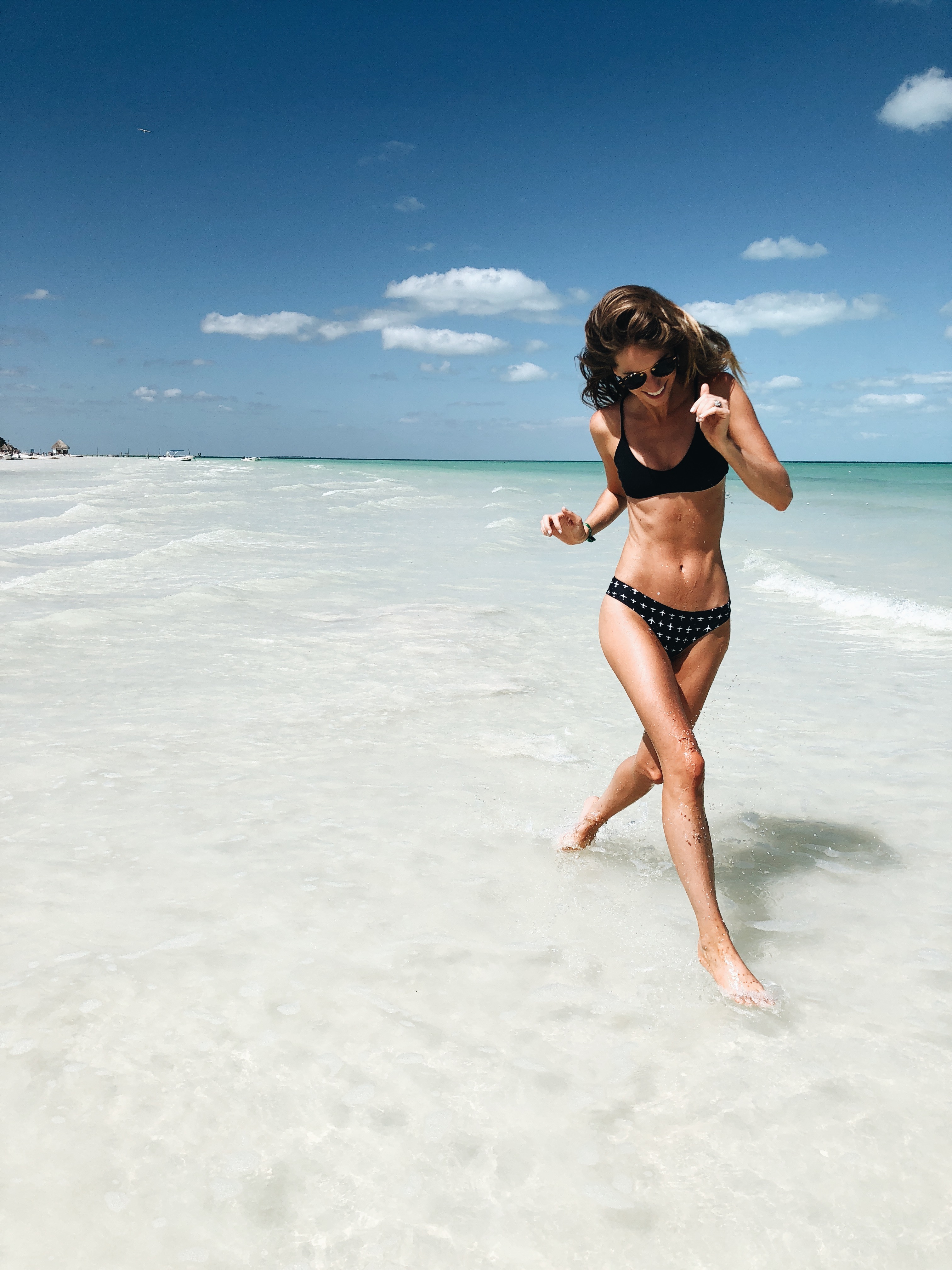 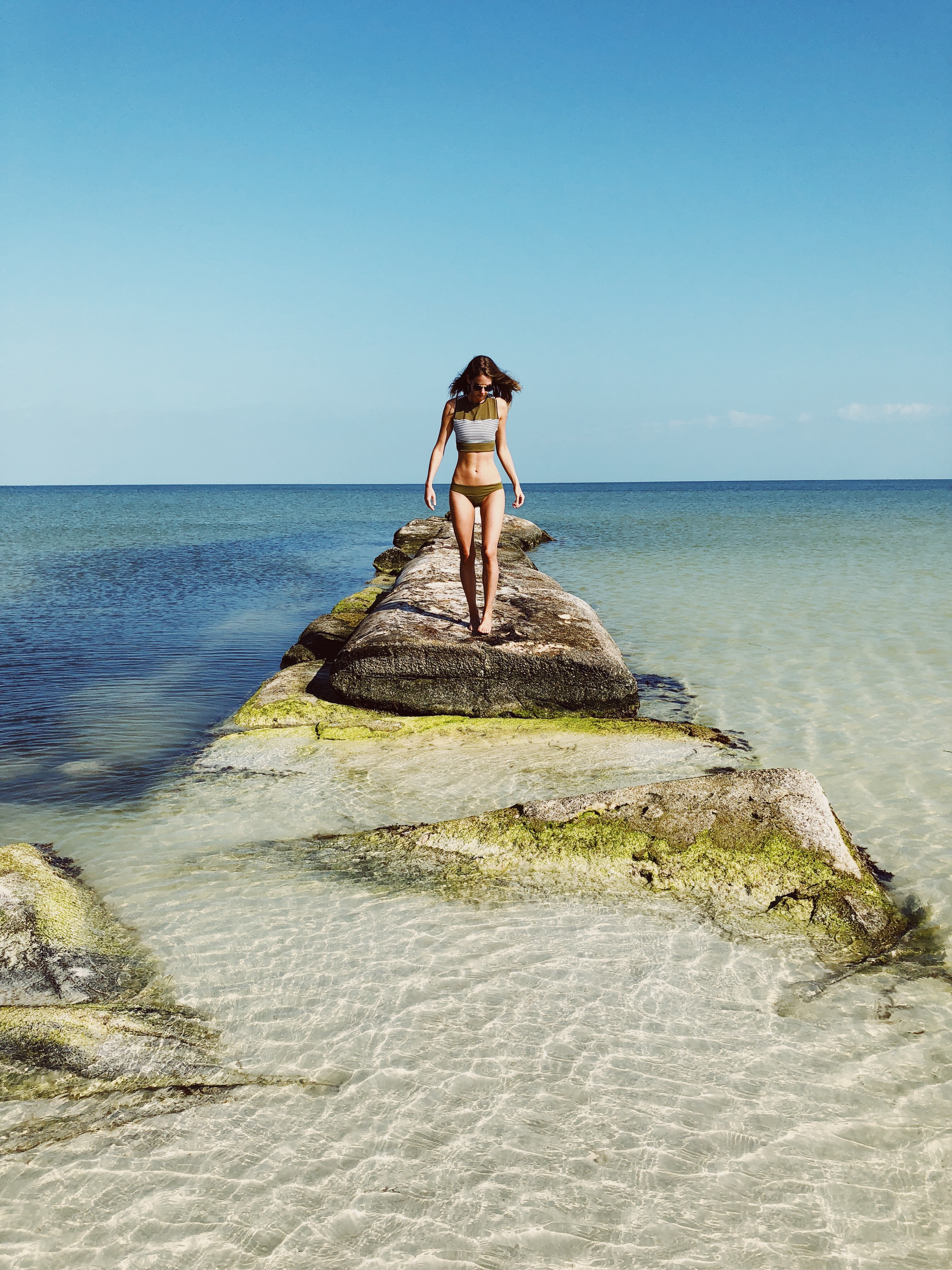 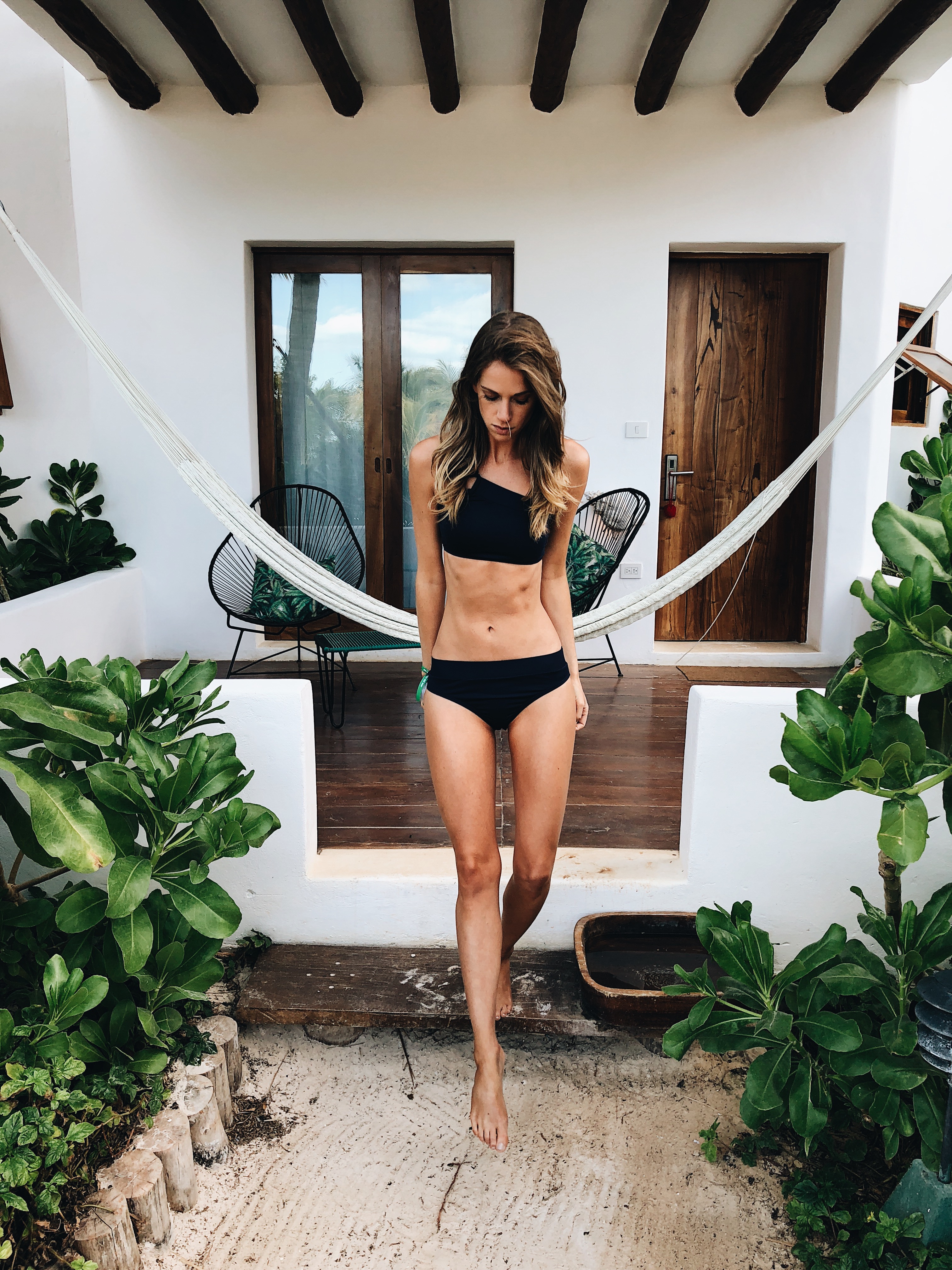 What I wish I would have brought:
a backpack
kick around sandals
sneakers
a wrap for cooler nights

a warmer outfit for travel

Overall, I loved the island.  Note that it isn’t the easiest to get to, and depending on the time of year it was be cold at night with the wind.  It’s much more Costa Rica than Cancun with the dirt roads, but the island is so much fun to explore.  The town has the best wall art and there are plenty of food trucks to try while you walk around.  Bring cash, most places will not accept credit card.  If I would have had time, I would have done Tulum as well but I will cover that soon!

Thanks to Anne and Juan for getting married and giving me an awesome trip to Holbox!