Flying an airplane – one thing that I never thought I would do.  But about three years ago, I was stuck in New York after a long and relaxing month in Montauk.  It was Saturday, and I arrived off the train for a flight back home out of JFK.  Except the flight had been cancelled – along with every other flight.  There had been a series of storms come through and every flight out was grounded and then delayed and long story short, I was one of the last flights cancelled and couldn’t get a flight back home until Wednesday.  I had a meeting that could absolutely not be missed on Monday morning.  Had to get back, no choice.

The rental car lines were longer than the worst TSA checkpoint you’ve ever seen.  After waiting for about an hour, all of the rental cars were sold out.  “What about La Guardia or Newark?” You ask.  Nope, all flights booked, all rental cars gone.  I literally started looking into trains and buses before I realized that it would get me there on Tuesday at the earliest.  I even asked someone I overheard going to Savannah if they would just get me closer to Greenville.  The crazy lady wasn’t well received.

So the calls started to everyone that had a plane.  It was a definite ‘Devil Wears Prada’ situation.  “Call Donatella!” I wanted to yell from across the Enterprise store.

Finally there was a friend that thankfully sent his pilot up the next morning for a pickup from nearby Islip.  I hated the feeling of being stuck, unable to get myself home because of a lack of skill and knowledge. 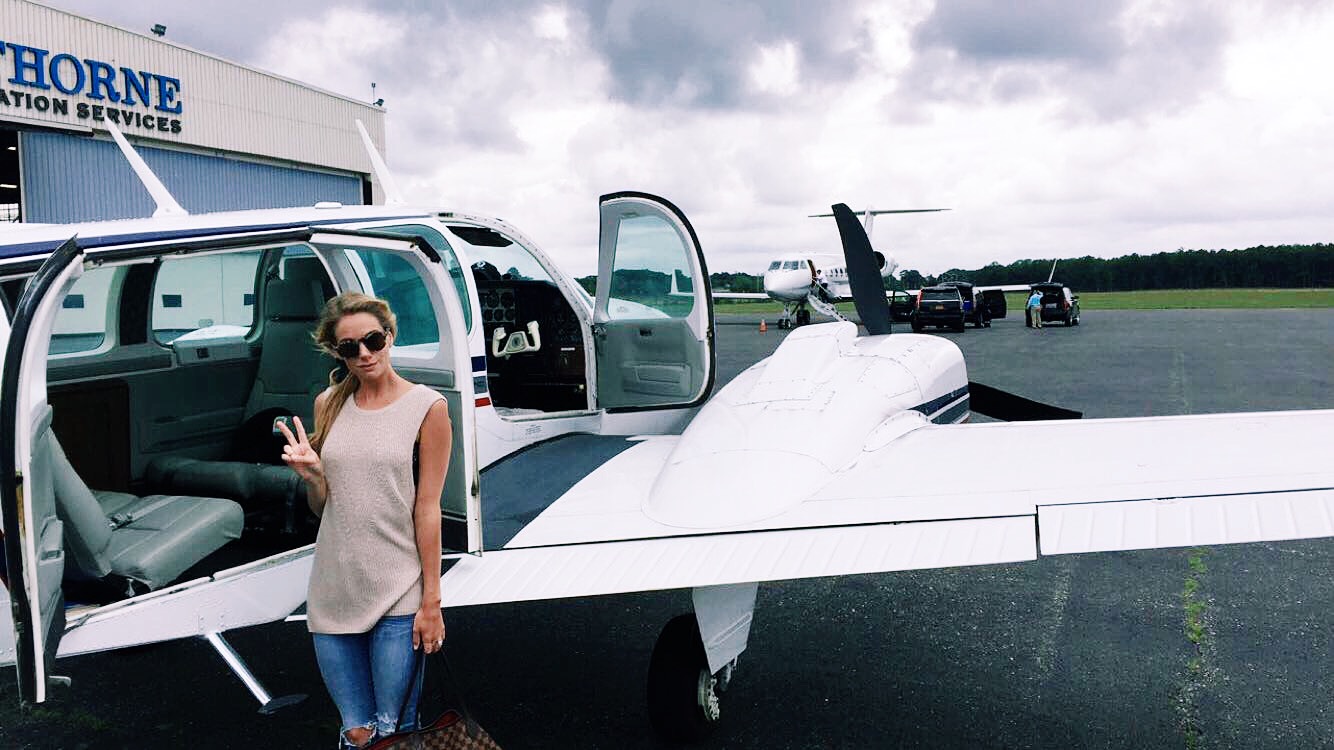 After that trip, I flew a few times with our friend, Cliff.  Cliff is a wonderful person to fly with – always calm and level headed.  He really makes flying look easy.  I would find out later, that it’s anything but.

I wanted to take a lesson to make sure I didn’t hate it.  Or vomit.  I also just really wanted to see if I could do it.  Later in life there have been moments where I wonder if I could learn something new, take on a hobby, or push myself a little harder.  So why not take on the hardest thing I could imagine?  Definitely questioned the decision a time or two after it was made.

Greenville Aviation was where Cliff trained and even taught for a while, so that’s where I decided to do my training as well.

I called and left a message, and about two days later I learned that I was pregnant.  That was the answer to my flying future – a straight no-go.

But unfortunately most of you know how this ends, eight weeks later I lost the child.  I was devastated.  But also a firm believer in the truth and that God has a plan.  God wouldn’t put me through a season I couldn’t handle.  So I decided that the only way was up.  Literally.

I called the flight school back and scheduled my first lesson with CFII (pilot talk for flight instructor) Ryan Bragan.  Ryan has been flying since he was 17, and now at 26..still looks 17.  (He knows this, and Ryan it’ll all be worth it when you’re like, 60.).

I never knew the importance of picking a flight instructor because I didn’t have a need.  I struck gold with Ryan – the perfect type of teacher for my learning techniques (he draws GREAT pictures) as well as calm and very patient.  Ryan has now been on numerous vacations with us, and he’s become a friend.  My point is, I have now spent over 200 hours in a seat next to Ryan, and about 20 hours in the classroom – so make sure you like the person.  Or at least make sure they don’t smell.

After my first few flights, I didn’t know if I could take it.  I would land with the worst headaches and couldn’t fly for very long before they started.  I quickly learned that the right headset makes a world of difference and my Bose A20’s was the best purchase I ever made.  Noise cancelling was a must, and besides having to come down to pee, I could fly for days after making the switch.

I started my training a year and a half ago, and flew for about 65 hours before I took my private pilot exam and check ride.  You need 40 hours as a requirement, but when we left for another New York trip for a month, I got back and had lost a lot of my knowledge and muscle memory for maneuvers and landings.  One of my recommendations for flying is to wait until you have about 4-6 months open and free to give it your all.  Fly often, and put in the time studying.  It can easily drag out if you are constantly re-learning the same information over and over.  It’s also like learning a new language, so be ready to hit the books.

I rented a trainer plane from Greenville Aviation, a good ole 1972 Cessna-172.  She’s missing a few screws, but if you give her a good shake during pre-flight and make sure everything stays together you’re alright.  N20155 was my best friend for a while.  One of my friends learning to fly in California came to Greenville and took one look at her and said, “There’s no way Paula actually flew in this thing.”  But I did,  she flies just fine.  I actually took her up about two weeks ago and after her shake down she was ready to roll. 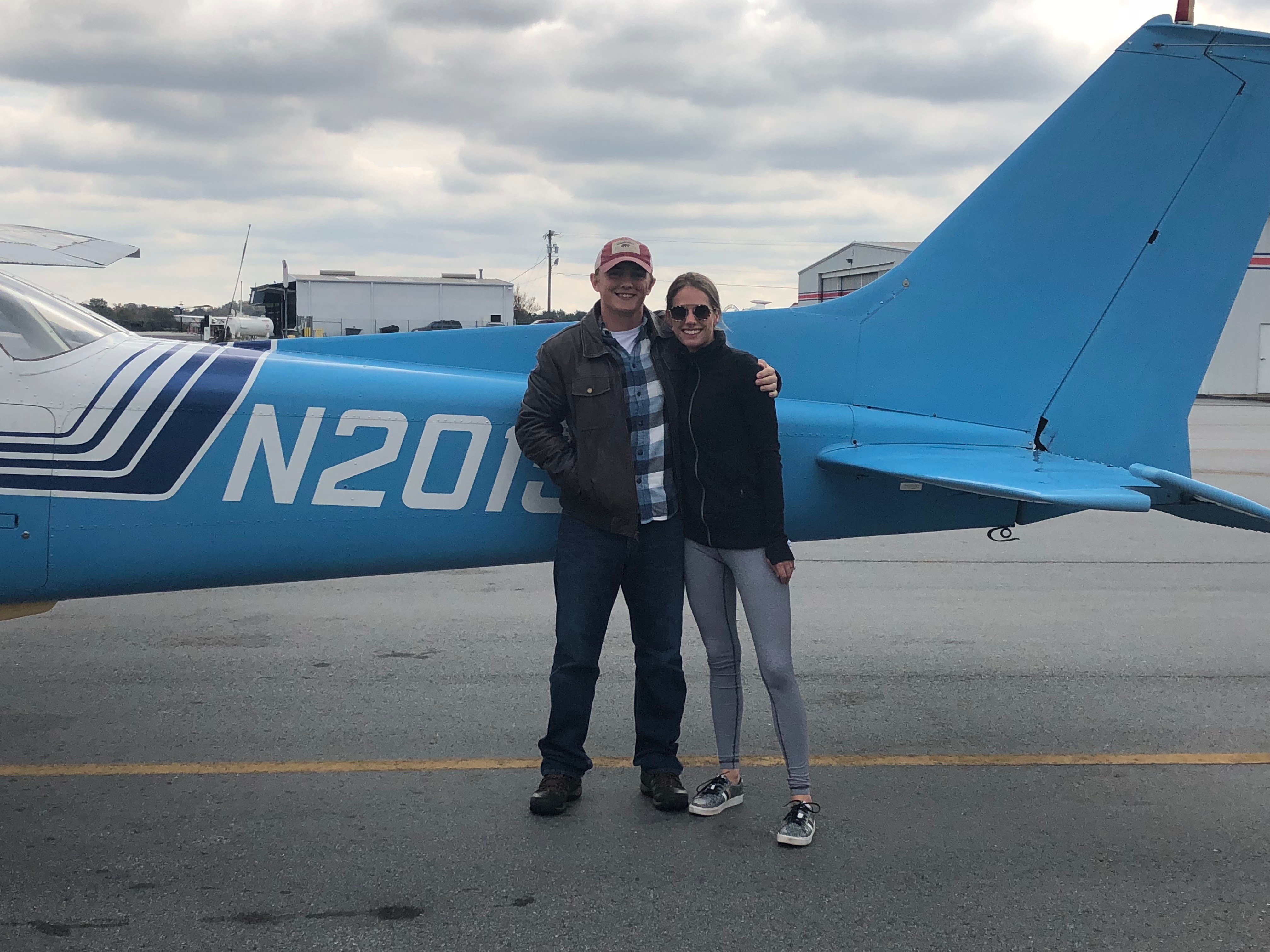 You’ll need to pass a written test before you can take the oral and practical (check ride) exam.  Don’t wait like I tend to do.  (I just tell myself I work well under pressure.)  This last written test I took two days before my oral and check ride and you have to study for each very differently.  Studying for both at the same time literally sent me into a studying spiral of not leaving the house for three weeks.  Just get that written out of the way as soon as possible.

To study for the private, I used MZeroA’s Ground School Academy, as well as lessons with Ryan in the classroom.  MZeroA has numerous videos, and the owner of the school lays it out in plain English.  I highly recommend it, the videos helped refresh what I was learning in the plane.

After my first solo flight last fall and passing my private, we had a Columbia 400 for a few months.  Because I was a newborn pilot and this airplane was a lot more to handle than the Cessna-172 I trained on, insurance required Ryan to fly with me for a while.  He actually flew with us for the short time we owned the plane just to realize that it wasn’t the plane for us.  We took a flight to Turks and Caicos and realized that it was just too small for more than two passengers.  The Columbia 400 (now called a Cessna TTX) also has a joystick instead of a yolk.  I was not a fan.  I never felt like I truly had 100% control of maneuvering the plane.  So off it went. 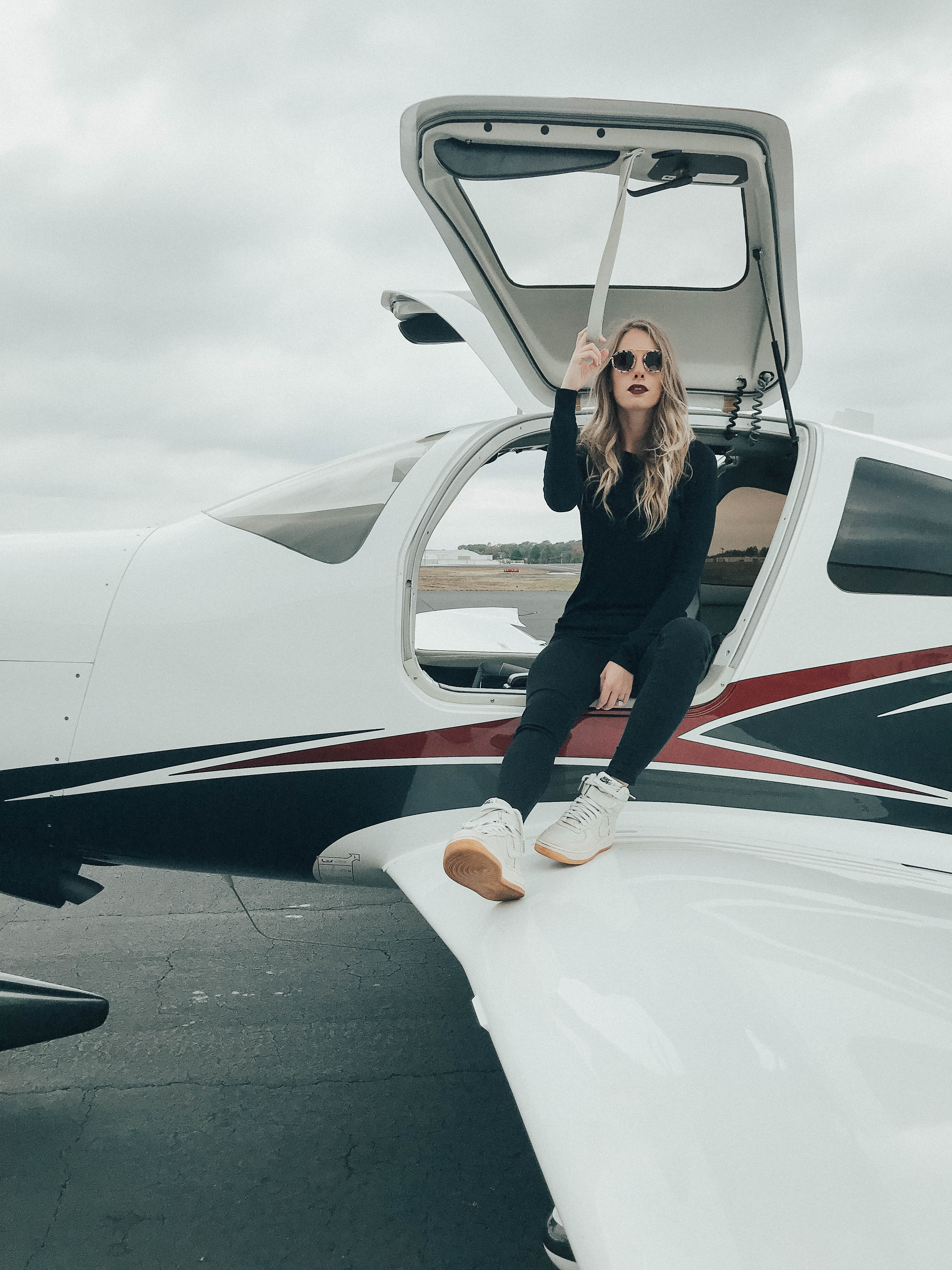 After I finished my pilot pilot check ride, I went straight into training for my instrument.  We got a Piper Mirage, but insurance again wouldn’t allow me to fly it by myself for at least 100 hours in the left seat as pilot in command, and a year of experience.  I also had to go to Piper school for a ground training, simulator training and flight training before I was even allowed to grace the front seat with my presence.

So once again, even though I had my license, I couldn’t fly our plane.  That’s a frustration of starting out as a pilot – for a while, you’re really not done.  You get your private, but you can only fly certain planes in good weather.  I had my high performance, complex, and instrument starting me down before I could really go anywhere.  I took a few flights to nearby places like Reynolds Plantation, but covering a distance usually meant you were running into some kind of weather.  As a private pilot, you can’t fly into clouds or weather that is less than ideal.  You’re kind of stuck to local flights or a perfect day from point A to point B. 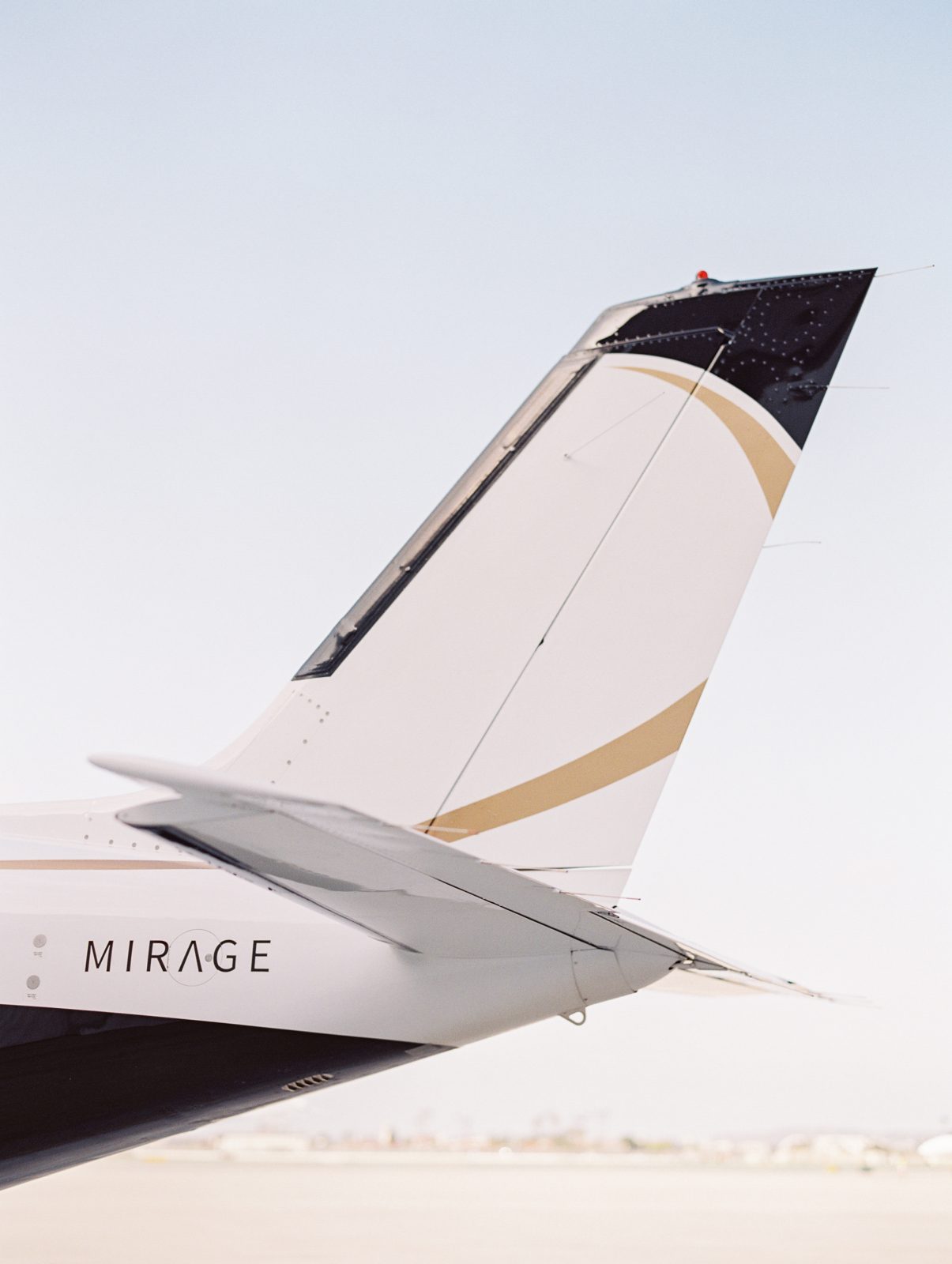 I thought that my private was hard, but instrument was a different animal.  Thankfully we took a lot of cross country flights in the Mirage to work up my hours and help with my training.  Within the first few months we did Denver, Virginia, San Diego, Las Vegas, Arizona and New York.  With instrument, the requirements are up there and some pilots struggle with adding up cross country hours.  I was there within a matter of months, but it was the studying in which I couldn’t seem to find time.

Towards the end of summer, I knew I only had a limited window to get this done.  I was in the middle of the surrogate search, I was opening an event space and a home store, I was flipping six homes and renovating two of my personal houses, I had a trip to the Bahamas, then Charleston followed by Connecticut, France, and Montauk, and I started Harvard back on September 5th.   It was now or never.

I had to hole myself up in our apartment for weeks to shove all of the information into my brain.  I know for a fact that I never studied this hard in undergrad – this test was making my time at College of Charleston look like a joke.  There’s just so.  Much.  To learn.  I felt like I would never get it done.  I set a deadline of the end of August knowing that it was then, or I would likely have to start over again like I did with my private after a month in New York.  I used MZeroA’s Online Ground School Academy and Sporty’s Instrument Rating Training.  Two trainings basically teaching you the same thing may seem like overkill, but the teaching style is so different with each that I figured it couldn’t hurt to see what my brain would absorb.

I didn’t have a life for what seemed like years.  I had to leave my phone in the living room while I studied in bed so I wouldn’t be tempted to answer phone calls or respond to emails.  I didn’t speak to anyone for days!  But finally the last week of August came and I went through my written and passed, and then my oral and check ride and passed those as well with the biggest sigh of relief.  The next morning I left for the Bahamas and it could not have come at a better time. 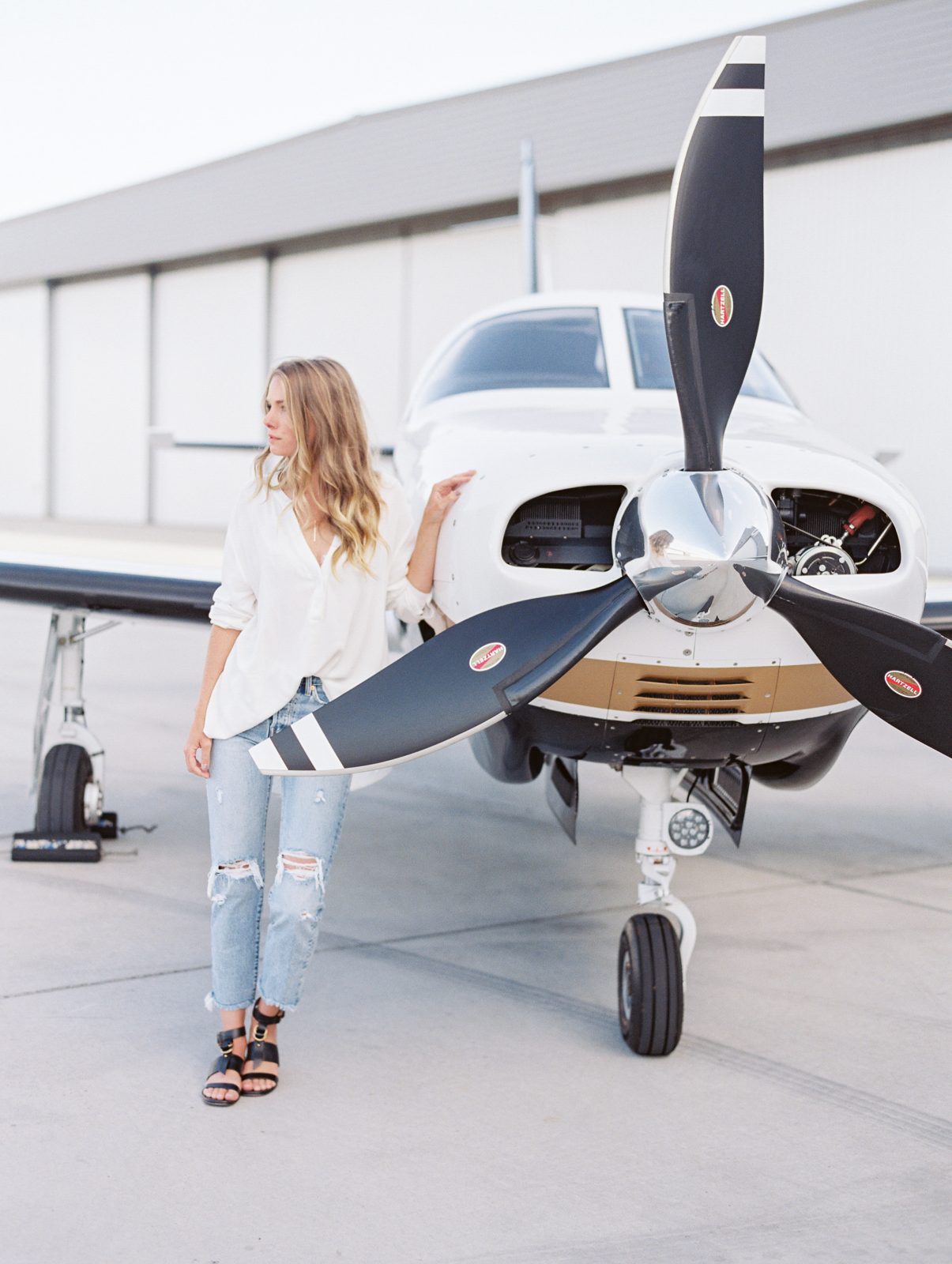 Ryan and his (new) fiancé Katrina came with us to celebrate and fittingly we stayed at a home on Harbour Island that used to belong to Rosie, now called Touchstone and also owned by a pilot.  Rosie was Jackie O’s private pilot.  A wooden propeller hangs in the kitchen and the next to the front door is a sign marking ‘Bahamas Alpha.”  I felt honored to stay in the home of such a well known name in aviation.

Only six percent of pilots are female, and I am the only woman that Ryan has ever trained to complete an instrument rating – the only one he knows of to complete it at Greenville Aviation.  Ryan is about to leave training for the airliners, but I told him he wasn’t allowed to go until I got my 100 hours in the Mirage and my instrument out of the way.  I wasn’t about to start flying with someone else.  I now am a private pilot with an instrument rating, high performance and complex endorsed, and 43 hours away from my commercial pilot requirements.  All because of that weekend I was stuck in New York and an itch to see if I could do it.